Annoying Orange: Back to the Fruiture

Annoying Orange: Back to the Fruiture

Back to the Future

Back to the Fruiture is the twenty-eight episode of the Annoying Orange series. This episode introduces oranges from the future coming to save, or kill Orange.

This episode would take place sometime after Founding Fruits because the Whistling Pinwheel is seen when it is supposed that Future Orange took him.

The Whistling Pinwheel also returns to the series after Luck o' the Irish. as one of Orange's wishes from Liam.

Orange and Pear in a heated argument over the whistling pinwheel (as seen in Luck o' the Irish), when suddenly a ball of lightning appears and another Orange wearing goggles comes out. The other Orange tells Orange that he came from the year 2053 and that he is from the future. Orange is unconvinced and demands proof. The future Orange shows him his future drivers licence and his ray-gun, but Orange is still unconvinced. When future Orange shows Orange his glow stick, Orange is finally convinced. Future Orange explains that he was sent from the future to warn Orange that an evil warlord wants to kill present-day Orange, causing future Orange to never exist. He then tells him that the whistling pinwheel is the most powerful weapon in the universe, capable of destroying anything. Pear refuses to give up the pinwheel when a second ball of lightning shows up and the warlord appears. The warlord takes the pinwheel and uses it to obliterate Future Orange. Pear demands to know why the warlord killed future Orange. The warlord removes his visor to reveal another Orange, who explains that the future Orange was really the warlord and that he wanted to kill him. The episode ends with the two Oranges laughing and Pear whining "Oh, god.", much like at the end of the first episode.

Fruity Question of the day

If you could time travel, where would you go? 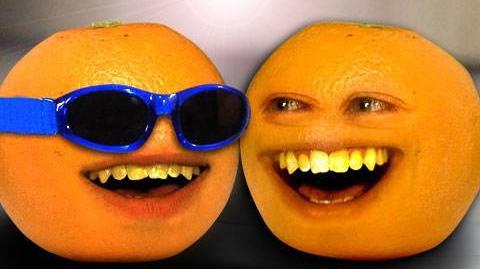