Crabapple is the 36th episode in the Annoying Orange series. This episode marks the first appearance of Midget Apple, as well as the return of Pumpkin.

The episode begins with Orange singing a song about bananas to himself. A cranky crabapple then criticized his song. Due to his size, Orange was unable to locate him, until Orange finally found him.

When Orange exclaims that Crabapple's a "midget apple", the camera pans to a real midget apple. Orange annoyed Crabapple by his puns, thinking that a nearby golden delicious apple with a crab riding him was a crabapple, and getting Crabapple to hear his tale about the story he met Pumpkin. Meanwhile, Pumpkin appeared, crushed Crabapple to death by sitting on him, and talked with Orange until Crab came to drive Pumpkin crazy.

Fruity question of the day

What the #1 thing that makes you crabby? 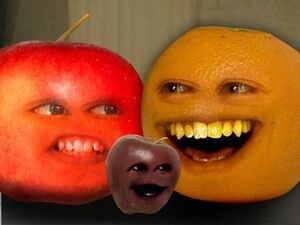