Kitchen-Mon is the 46th episode of Season 4 and 163rd overall episode in the whole series.

Orange and Grapefruit have an animated Kitchen-Mon battle, a parody of a Pokémon battle. And of course, Orange wins. 3 more Kitchen-Mon would be made in the next couple of years.

(1): This video is animated by the late Myk Friedman (also known as his YouTube name, "Toonsmyth"), well-known for doing his own videos and UCF: Ultimate Cartoon Fighting, such as SpongeBob vs. Adventure Time, Adventure Time with Kirk and Spock, the Twilight Animated Parody series, GOKU - THE END?!, My Little War Horse, What's Going On? (The Ice King video) and the Goku vs. Everybody franchise etc.

(2): Orange also appeared in the GvE bonus round, Goku vs. Orange and again in one of the hungry games episodes. 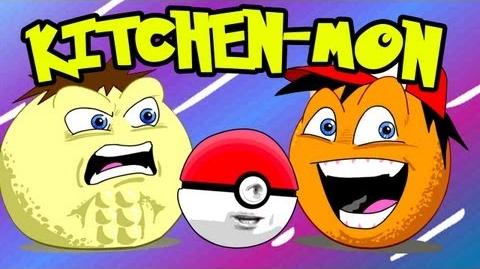