Pacmania is the twenty-third overall episode in the Annoying Orange series and the eighteenth short of Season 2. This episode features Pacman-related elements.

In a Pacman game, Blinky was chasing Pac-Man, and killed him. With only one life left, Pac-Man was transported to the kitchen. Meanwhile, Orange comes to fight the ghosts. Orange makes up puns about the ghosts, calling them "cops" and making fun of them. Orange eventually kills Blinky, which makes the other ghosts come to chase Orange. When Orange gets a stomachache, the ghosts come to make an attempt to kill Orange, however, Orange throws up 'Tic-Tacs' at them, causing them to die. Orange continues to eat the dots. Then, an extra life orange appears. Inky wonders what happened to Pac-Man. Meanwhile, at the kitchen, Pacman is trying to talk to Pear, but Pear tells him to "shut up" because he couldn't understand what he is saying and was making the same noise for 3 hours. Strawberries arrive in the kitchen, and Pacman almost immediately jumps to eat them.

Do you believe in ghosts? Have you had a ghostly experience before? 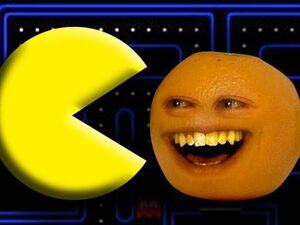