Annoying Orange Wiki
Register
Don't have an account?
Sign In
Advertisement
in: Articles with long plots, Episodes, Season 2,
and 7 more

I think I need a longer tape measure.
This plot may be too long to accurately summarize the episode. Please help Annoying Orange Wiki by fixing it, or by discussing this issue. This article has been tagged since September 22, 2013.

This article is about the episode. You may be looking for Mario.

Super Mario is the fifteenth episode in the Annoying Orange series. This episode features Super Mario and several elements based on the Super Mario games such as the Bullet Bill and the Koopa Shell.

Mario appears and noticed Bowser was missing,and heard a laugh in the distance. He found Orange, who cracks a pun about Toad. Mario prepares to fight, but Orange is hungry, so Mario attempted to kill him by throwing a fireball at him. Orange wasn't harmed, and called Mario Mr. Pick-n-Flick. Mario tries to explain his real name, but Orange started nicknaming him Spaghetti-Os. After more name-calling puns, Mario attacked Orange with fireballs again , but Orange ended up laughing again, cracking more pasta puns, until Mario became angry and demanded where Princess Peach & Toad is. Instead, Orange burps a Koopa shell and Mario shrunk.Woah! Spaghetti-Os is bite-sized!). Mario calls Orange a big orange Rick Moranis, until eventually a Bullet Bill kills Mario. Orange calls Mario "Stupid Mario", and the camera pans out to reveal Toad and Peach next to him. Orange explained that he had defeated Bowser and saved them hours ago and Peach pointed out if by defeated, he mean he "annoyed the living crap out of him (Bowser) until he just got angry and left". Orange called her "Princess Apple", and Bowser demands the three to leave his castle at once.

What video game should I be in next? 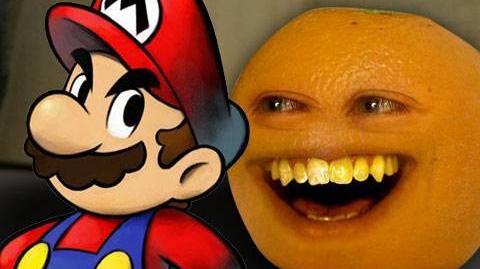