Orange, Marshmallow, Midget Apple, and Pear try to get Charlie the Unicorn to take them to see the rainbow. They end up on a crackety bridge, and because of Pear's and Midget Apple's suitcases, they all fell. The fruits were unharmed because of the parachutes inside the suitcases. Charlie, however, ended up with a broken leg. When they finally saw the two pots of gold, they encounter Liam the Leprechaun, claiming that those are his pots of gold. After a little while, Knife impales Charlie's remaining kidney (a reference to the fact that his other one was stolen in his own series).

Fruity Question Of The Day

What would you do with a pot of gold?

Watch the Original Charile the Unicorn

Written by Daneboe and Spencer Grove 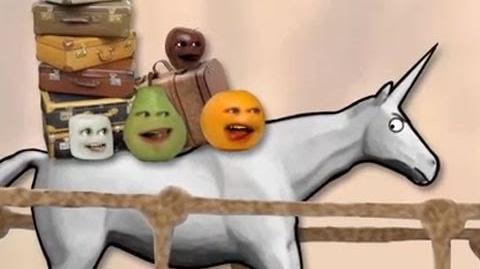