Annoying Orange Wiki
Register
Don't have an account?
Sign In
Advertisement
in: Shorts, Season 2, Articles with videos,
and 6 more

Annoying Saw 2: The Annoying Death Trap is the 42nd overall episode in the Annoying Orange series and this episode marks the first appearance of Marshmallow and the second appearence of Jigsaw. It is a sequel to Annoying Saw. Unlike its predecessor, no one got killed by Jigsaw's death trap.

Jigsaw hires Orange as his apprentice to annoy a Marshmallow to death. However, Marshmallow and Orange ended quickly becoming friends and started to muck around annoying each other with jokes, before Jigsaw decides to chop Marshmallow in half but the knife cannot go through Marshmallow, instead tickling him. Jigsaw gets angry and burns Marshmallow, but only the top of him burns and he still feels happy. Eventually, Jigsaw fires Orange and leaves, while Marshmallow and Orange still make jokes. Meanwhile a block of chocolate and a graham cracker say they didn't like where this was headed. Eventually, Charlie the Drunk Guinea Pig shows up to scare them with a chainsaw. (It is possible Charlie also killed them)

Based on SAW, written by Leigh Whanell 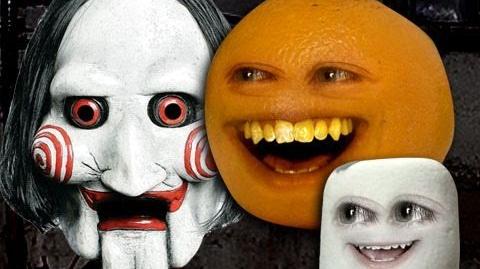