Welcome to My Fruitmare
[Source]

Guava is a supporting character of The High Fructose Adventures of Annoying Orange. He had made many cameos in various episodes, usually as a background character (like Copper Lincoln), or as a somewhat recurring character with speaking roles (like DJ Princess Buttercup or Pomegranate).

He makes his first appearance in "Welcome to My Fruitmare". Shortly after Grapefruit is juiced, Nerville introduces a new fruit to the fruit cart. Guava is then placed on the cart, and some grapes were killed, completely unaware that Teddy Juicer was on the loose juicing fruits. Orange had devised a plan to stay eternally awake and never fall asleep (this may Teddy could not ever get them).

However, 72 hours and 1 minute later, people began dozing off, and a bunch of fruits began to die. Orange and Guava then managed to fall asleep with the others, and that's where Guava got his pair of feminine legs. He explained that you can wish up anything you wanted in the dream realm, and Orange began wishing for stuff.

Teddy Juicer responded to this by wishing up some Limb Removal Spray, and this caused Orange's arms and Guava's legs to disappear, and Guava was juiced. Orange managed to rescue everyone by annoying Teddy which spoiled his appetite for fruit and then crushed him with a 1-Ton Weight. This had revived everyone that was killed (including Guava). However, for an unknown reason, Guava kept his pair of feminine legs, which terrified everyone else on the fruit cart.

His next major role was in "Marshmallow Wedding", when he had congratulated Marshmallow on getting married and attended his wedding. When they had shown up on Marshmalia, the gang met Marshmallow's mother, and we're all very surprised (despite Orange, Pear, and Midget Apple meeting her a couple years prior). Peach questioned if Marshmallow's father was a marshmallow as well, Guava deemed the moment as "awkward" and Coconut went back to standing there silently with his mouth half-opened.

Mama Marshmallow had explained that Marshmallow was being married to Grumblabla, despite him being a beast that eats Marshmallows. Mama Marshmallow's only excuse was the fact that "there was a very large dowry involved". To make matters worse, everyone attending the ceremony would be dumped into a chocolate volcano as a ceremonial sacrifice. A bunch of mayhem began starting as the Marshmallow Minister was reciting verses, and Grumblabla had begun molting out of her outer shell and eating a bunch of wedding guests.

This went on until Nerville had accidentally crushed her with the fruit cart upon his arrival at the wedding. Since that episode, Guava had been making many cameos as a background or minor character (much more often during season 2), mostly used as comic relief to surprise others.

Guava is a tropical fruit with two feminine legs and a Spanish accent. He is native to Mexico, Central America, and many countries in South America, being the reason for his accent. He seems to have a more laid-back and rather feminine personality.

Hey! These portions are an insult. Bring me more plates!
This article's gallery is either a stub or lacks pictures of more recent events in the series. Please help this page's gallery by adding more recent pictures or more pictures in general. 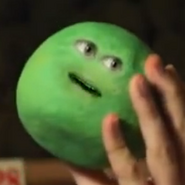 Guava's different shape
Add a photo to this gallery
Retrieved from "https://annoyingorange.fandom.com/wiki/Guava?oldid=167823"
Community content is available under CC-BY-SA unless otherwise noted.