Liam the Leprechaun (also known simply as Leprechaun or The Jolly Green Giant by Orange), was a major antagonist and a recurring character in The Annoying Orange. As one of Orange's victims of his annoyance, he had sworn revenge on Orange since the day he was crushed by his own pot of gold. Liam currently lives in his own poorly-drawn kingdom with a clover and the Leprechaun Boss.

Liam the Leprechaun was first introduced in Luck o' the Irish, looking for the pot of gold that he had lost. Orange revealed that he actually obtained his pot of gold, and Liam agreed to give Orange 3 wishes in return for the pot of gold. Orange had first wished for a whistling pinwheel, which he used to annoy Liam. Liam, annoyed, confiscated the pinwheel from Orange until he confirmed his remaining two wishes. Orange had wished to have his pinwheel returned to him. However, Liam explained that wishing for the same thing more than once was against the rules. Orange had then wished away the rules, annoying Liam even more. Liam then offered him a car, a unicorn, a woman in a bikini and some cereal marshmallows. Orange turned down the offer, claiming that marshmallows gave him gas. Annoyed, Liam begins reprimanding Orange on how he's turning down an offer for pretty much anything he wants. Orange explained that he wanted a pinwheel, and then wished for a pot of gold. Liam finally loses his temper, and tells Orange to keep the pot of gold. When Orange tries to cheer Liam up, he begins yelling at him, making Orange wish he had his pot of gold so he'd be in a better mood. However, this wish causes Liam to be crushed by his own pot of gold, landing him in his poorly-drawn kingdom. Liam is then summoned by the Leprechaun Boss, who is disappointed by Liam for being squashed by his own pot of gold. Although despite Liam's conduct, the Leprechaun Boss, along with an ill-mannered clover, always pick on Liam for an unknown reason. Liam is then granted another pot of gold, which he quickly transports to another location by accident. A stressed Leprechaun Boss then enjoys an afternoon of whiskey. Liam then meets Grapefruit, who has found his pot of gold and was planning on spending it for his own enjoyment. Liam then decided to give Grapefruit 3 wishes in return for a pot of gold. Grapefruit wishes for a pair of dumbbells, a date wish Passion Fruit and a parakeet. However, the dumbbells turned out to be "girly", his date with Passion Fruit was literally a date with a picture of Passion Fruit, and his parakeet turned out to be the Terror Dactyl, who had stolen his pot of gold. Since then, this processed has continued. Liam meets someone who stumbles upon his pot of gold, he gives them 3 failed wishes, and he somehow gets his pot of gold stolen by the third wish. While this occurred, Liam has thought up various schemes to try and get revenge on Orange. He frequently returns to the kitchen at least once a year to visit Orange to either steal their gold or just be accepted by the group. However, he has been squashed by Squash after various attempts at doing this. Liam is also kept out of the kitchen by the leprechaun trap and the shoe horn. He returns briefly in 2019, but catches the "Leprechaun Flu," and gets so sick that he explodes.

Hey! These portions are an insult. Bring me more plates!
This article's gallery is either a stub or lacks pictures of more recent events in the series. Please help this page's gallery by adding more recent pictures or more pictures in general.

Stage 1 of the Leprechaun Flu

Liam explodes and this time he is not revived 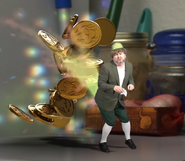