Nude Dude (originally known as Apple before he was peeled, also known as Barewolf) is a recurring character who first appeared in Nude Dude and first mentioned by Orange in Prank Call #1: Tanning Salon as one of his friends. Ever since, he has made multiple appearances in the Annoying Orange series, despite being knifed in the same episode. Unlike most apples, he enjoys Orange's jokes and even plays along with them. according to Orange, he is "not a total apple".

Nude Dude was first mentioned by Orange in Prank Call #1: Tanning Salon. Orange saw one of his friends (Nude Dude) get peeled once. It wasn't pretty and he got baked into a crisp.

Nude Dude returns as a normal fruit in the kitchen. He and Orange are making jokes together, annoying Potato. Nude Dude is then peeled by Dane Boe possibly to be put into an apple pie. However, after being skinned alive, he is put back on the counter to be cored, giving him a chance to joke around with Orange about being "naked". Nude Dude is then knifed and put on a plate to be taken away and eaten. This causes Orange despair. Potato is very happy about this, until he gets knifed. Nude Dude is then mysteriously revived and decides to go trick-or-treating with Orange, Pear, Midget Apple and Marshmallow. They all go to a house where Grandpa Lemon was staying for the night, and trick-or-treated. Grandpa Lemon, also thinking that Nude Dude was actually naked, had requested that they leave. Much to their irony, the clouds kept blocking the full Moon, which had caused Nude Dude to turn into a werewolf, and got the nickname "Barewolf". He was then eaten by an actual werewolf. Nude Dude is mysteriously revived again and seeks occupation as one of Midget Apple's new partners. Midget Apple refuses to let him join, because he, too thought that Nude Dude was naked. However, he, along with Captain Obvious, Orange, Melony Vavoom and Grandpa Lemon had become Midget Apple's new partner. He has made many appearances since then, most recently in Ask Orange #66: TNT ABC's!, where in the game show Peel or No Peel, he chose “no peel” 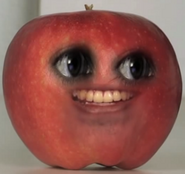 Nude Dude before he was peeled

Nude Dude in the peeler 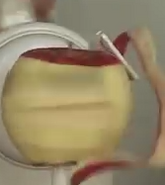 Nude Dude after being peeled 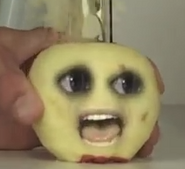 Nude Dude's core being taken out 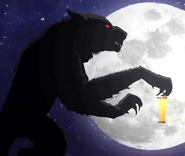 Nude Dude being eaten by a werewolf 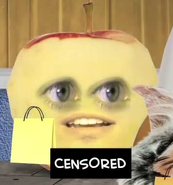 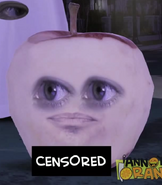 Nude Dude in Buddy Cops 3
[[1]]
The Achievement Leaderboard has created a badge for this character called Dude Is Nude Dude and is in the Gold track, and can be awarded to you by registering and contributing to the wiki for 100 days in a row. It is a Gold medal, meaning it is worth 100 points.
Community content is available under CC-BY-SA unless otherwise noted.
Advertisement