View source
Stub
This article is a stub. You can help Annoying Orange Wiki by expanding it.

Peach is a recurring character exclusive to The High Fructose Adventures of Annoying Orange. She first appeared in Fruit Plane! where Grandpa Lemon thought she was a stewardess (or as she calls it, a "sky waitress"). Later, when Coconut mistakes her for a flight attendant, and she corrects him by saying "Just because I'm a girl doesn't mean I'm a sky waitress", the real flight attendant gets angry at her because he says it's offensive to call a flight attendant a "sky waitress". She is seen in several future episodes. 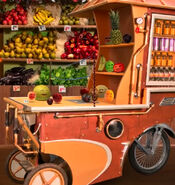