Hey Apple!
Pear is a main character on the Annoying Orange series. He is the deuteragonist (secondary protagonist) of the series and is among the only characters to appear in every season. He is a Williams pear who inhabits the same kitchen counter as Orange who is too annoying for him, his former best friend and current rival. He has his own show called “Pear's Extreme Challenges“. Orange's best friend, even though he usually doesn't want to admit it (however, he had admitted it in Orange Goes Hollywood and My Name is Orange, and almost admits it in The Fruitrix). Pear simply began as a minor character that was annoyed by Orange as much as Apple, and became disappointed when Orange began to annoy him.

"i freaking hate shocktober!" - pear in certain shocktober episodes when he gets scared like in the gameplay of i peel fine

Pear is often the voice of reason in the kitchen. He usually stays calm in difficult situations, has an easygoing nature, and rarely insults anybody. Pear is good at socializing, which has helped him make friends in the kitchen. It is also shown that he is just about always acting and being serious. At times he can be a bit of a social "loser", (which was stated in Wishful Thinking that without Orange he would have no social skills or friends). In Deviled Egg, his heart's desire that he requests is a book called "How to Make New Friends".

Pear is Orange's best friend, although he usually doesn't want to admit it (however, he does admit it in Orange Goes Hollywood and in My Name is Orange, and he almost admits it in The Fruitrix). Pear began as a minor character and joke filler who was as annoyed by Orange as Apple, and became disappointed when Orange began annoying him after Apple was knifed. The same thing has occurred in many episodes after that, and he was introduced as a main character during mid to late season 2. Later in Season 2, Pear had become more involved in the series as most episodes. As of late season 2, he was marked officially as the main deuteragonist of the series. Pear had met Midget Apple and Marshmallow around the same time that Orange had, and he has become well-acquainted with them. He is very good friends with Midget Apple and is also pretty good friends with Marshmallow. Pear was not on very good terms with Grapefruit (as shown in Best Fiends Forever when he took a hike when Grapefruit was moving into the kitchen). However, he has warmed up to Grapefruit, along with the other residents of the kitchen over time. Since then, Pear has been the voice of reason and logic around the kitchen, usually welcoming new guests of the kitchen and asking them to excuse Orange's annoyance. Pear, along with Orange and the rest of the gang, lives part-time on a fruit cart with Nerville in Daneboe's Grocery Market. Because of his modest personality, Pear was dubbed by Orange and many other residents of the kitchen as "boring". Pear tried to prove that he wasn't boring, by running a show called "Pear's Extreme Challenges", which usually don't end well for him.

Pear has a love interest, a lizard named Liz Lizard. She moved away, but they recently were able to reconnect. It is unknown if they are currently dating.

Orange frequently states that Pear is his best friend, however, Pear is very annoyed by him and doesn't think so. The two do spend a lot of time together, however, that's mostly because they live in the same kitchen.

Pear is really good friends with Midget Apple. The two are both very sensible people most of the time, and because of that, they get along just fine. Midget Apple is known to laugh at Pear for being boring sometimes however.

Pear and Grapefruit sort of getting along. In the sense that Orange has an awkward relationship with Grapefruit, Pear does too.

Marshmallow and Pear get along great! Marshy is always happy, and while Pear has sometimes been a bit of a "party-poo-pear", as Orange might say, he can certainly appreciate Marshy's happiness.

Pear kissed Passion's sister, Mandy once, but other than that, Passion and him are just really good friends.

Pear and Liz used to date in high school, but when Liz moved to Colorado, and Pear was heartbroken, they didn't see each other again until years later, when Pear lived in the kitchen counter. They danced together, but it is unknown if they are dating.

Books That Pear Has Read 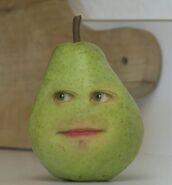 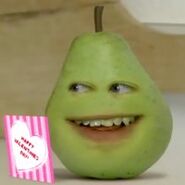 Orange, Pear, Marshmallow and Midget Apple babbling while riding on Charlie The Unicorn. 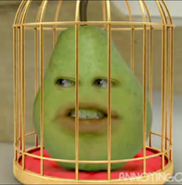 Pear in a cage

Grapefruit in a lightsaber duel during Orange's Theme Song

Pear after getting out of his Marshmallow disguise

Pear eating French fries with the rest of the gang 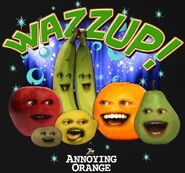 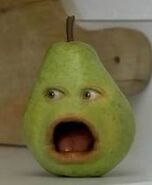 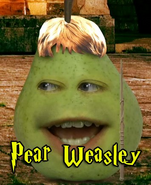 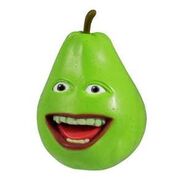 A toy of Pear 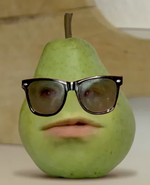 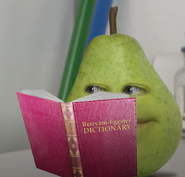 Orange, Pear, Marshmallow and Midget Apple running away from Squash. 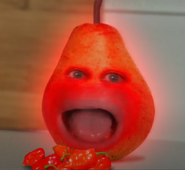 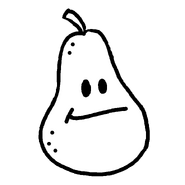 Pear in Draw My Life.

Pear locked up inside a cupboard. 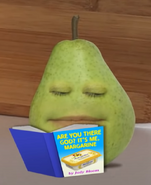 Orange as PSY with Passion Fruit and Pear on Horses. 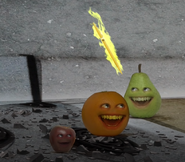 Pear with "the rock and roll attitude flowing through his body". 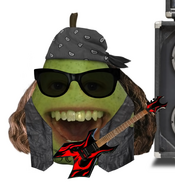 Pear after "the rock and roll attitude flowing through his body".

Pear in his red DaneBurgers uniform.

Cowboy Pear with Orange as PSY in an elevator

Orange as PSY and Pear with the beehive

HOW2- How to Survive a Tornado!

Retrieved from "https://annoyingorange.fandom.com/wiki/Pear?oldid=181629"
Community content is available under CC-BY-SA unless otherwise noted.