Sis (also known as Sister Orange, Orange's Sister, or The Annoying Sister) is a younger-sibling of Orange and I. R. Orange and is the daughter of Papa Orange and Mama Orange. She is a supporting character of The Annoying Orange. She made her debut in the Annoying Orange episode "Annoying Sister“ when she was visiting Orange in the kitchen in late September of 2014. Sister Orange was proven to be as annoying as Orange, as this sort of personality runs in Orange's family. This was proven in Mommy and Me when Orange and his mother began annoying a yam together and were proven to be equally annoying. In this episode, Orange and his sister began annoying a can of beans.

Sister Orange made her debut appearance in Annoying Sister, as she is seen visiting Orange. She and Orange first began to explain to Beans their belief that whatever rhymes are a truthful fact. Beans contradicted this poppycock theory by saying that "a rabid skunk was on the loose who wears a hat and goes by 'Bruce'." Orange and his sister actually believe him and begin to panic. Beans then go to assure them that this rumor wasn't true, and he is then accused of lying. Beans then get very upset and tells them both to be quiet. Ironically, Orange and his sister ended up warning him about Bruce, the rabid skunk that was mentioned earlier.

She later appeared in "WHITE ELEPHANT", participating in the white elephant gift exchange. She seems to have similar traits to her brother Orange as well, an example being that she, along with the rest of the gang, kept playing her silver kazoo as loud as she could have no consideration for the fact that may gave Pear had a headache.

She made another appearance in "Valentine's Candy Crush", where it was revealed that Midget Apple had a crush on her. For some reason, this had infuriated Orange. Orange, still furious, went into the refrigerator to rage to the point where it shook the entire room. While this was happening, Midget Apple told Orange's Sister to open the package that he had ordered for her. When she opened the box, however, it was revealed that the candy hearts started to read very crude messages. The hearts then explained that their messages were romantic before they were dropped off of a moving UPeeS truck, dropped into a lake, and then thrown into a fire by the delivery man who kept repeatedly asking Midget Apple to sign for the package. Despite the hearts themselves explaining what had happened, Sister Orange still blamed Midget Apple for the hearts' sour attitudes and ran away. Shortly after, Orange gave Midget Apple his consent to date his sister. But after that, the One-Armed Man used a hammer to crush all of the candy hearts and attempted to crush Midget Apple as well. However, Sister Orange jumped out and rescued Midget Apple from a crushing fate, despite being upset with him for something that he didn't do. Even after this, the delivery man still wouldn't stop asking for a signature.

She has made appearances in many episodes after that one as a recurring character, like in Swimming Pool Shark.

She also appeared in Boys N Berry, and was a huge fan of them. 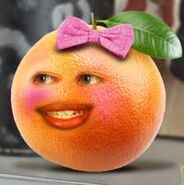 Sis touching her eye with her tongue with Orange. 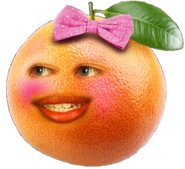 The Achievement Leaderboard has created a badge for this character called Sissy and is in the Edit track, and can be awarded to you by registering and making 500 edits on Characters articles. It is a Gold medal, meaning it is worth 100 points.